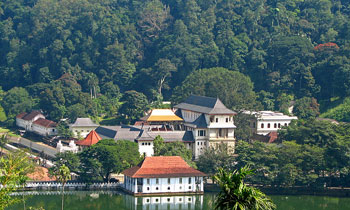 Officials of the Forest Conservation Department are perturbed by the decision of a senior forest conservator to alienate a 90 perch block of land of the Udawattakele forest reserve to a leading hotel in Kandy.

The officials said the officer concerned had instructed the Divisional Secretary, Kandy Four Gravets and Gangawata Korala to proceed with the required documentation to release the block of land based on a 12-year-old cabinet decision of a previous government.

A top Cabinet Minster in the Government has shares in the hotel.

They said that the relevant gazette notification to alienate the block of land was now being drafted and that the official responsible for this land grab might have provided misinformation to the President and Environment Minister.

Forest Department officials said the senior officials of the department were planning to alienate 90perches of the Udawatta forest reserve to the businessman concerned to expand a leading tourist hotel in Kandy and that the hotel company was already occupying the land illegally.

“The Range Forest Conservator had filed action against them in the Kandy Magistrate’s Court on the charge of causing a damage of Rs.73, 885,000 to the forest reserve. In 2005 the then Tourism Minister Anura Bandaranaike submitted a cabinet paper to alienate the land to the hotel company in exchange of a block of land in another location belonging to the company. However, it was foiled by the provincial forest conservation officials and other organizations that protested against the move. It is in doubt that the court case might have been brushed under the carpet due to political interference.

The Udawattakele forest reserve which had been used as a royal park during the reign of the Kandyan kings was declared a forest reserve by the British by an extra ordinary gazette notification under the Forest Conservation Ordinance. The value of the land which is rich in bio-diversity would run into billions of rupees. However the Forest Conservator (Planning and Progress Control) has taken steps to alienate the land and instructed the Divisional Secretary to release it from the forest reserve. 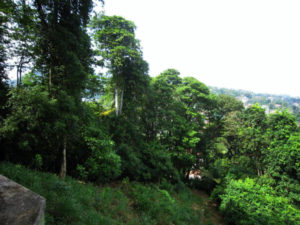 Forest Conservation Officials said that the Forest Conservation Ordinance does not provide for the proposed exchange of land from the forest reserve for one belonging to the hotel company and that it would create a bad precedent creating serious consequences. They are surprised how a cabinet approval that had been laid by successive governments for 12 years could be implemented without the knowledge of the present cabinet.