Joe Biden is set to take office as the 46th president of the United States on Wednesday, with a pledge to revive U.S. leadership on the global stage and long-standing alliances that have been undermined under Donald Trump’s “America First” policy.

While the inauguration ceremony has been overshadowed by the coronavirus pandemic and concerns of further unrest following the Capitol riot by a pro-Trump mob, the country will witness history through the swearing-in of its first female, first black and first Asian American vice president, Kamala Harris. 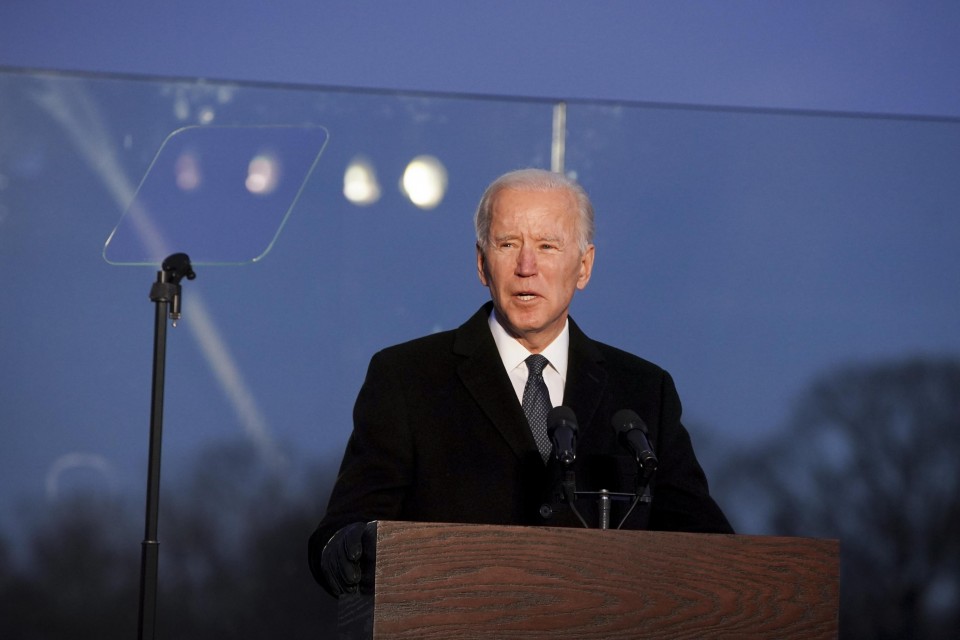 U.S. President-elect Joe Biden speaks at the Lincoln Memorial Reflecting Pool during a Covid-19 memorial to lives lost on the National Mall in Washington on Jan. 19, 2021. (UPI/Kyodo)

In a speech to be delivered on the Capitol steps, Biden, a 78-year-old former vice president, is expected to lay out his vision of tackling the daunting challenges ahead, ranging from curbing the spread of the novel coronavirus to reviving growth and of bringing unity to a nation deeply divided politically, racially and economically.

On the diplomatic front, the new administration is eager to restore U.S. leadership on global issues such as climate change while working closely with allies and partners to counter China’s growing assertiveness in the region and North Korea’s nuclear threats.

Following through on his campaign promises, the new Democratic president will start rolling back some of Trump’s controversial policies in his first hours as president by signing executive orders to rejoin the Paris climate accord and cease the process of withdrawing from the World Health Organization.

He also plans to reverse a travel ban affecting several Muslim-majority countries, which has been criticized as a policy rooted in religious animus and xenophobia.

Trump, a 74-year-old Republican, left the White House earlier in the day, making him the first outgoing president in over 150 years to skip the inaugural of his successor.

“Things that we’ve done have been just incredible….So just a goodbye. We love you. We will be back in some form,” he told some cheering supporters at Joint Base Andrews near Washington, before taking his final ride on Air Force One to head to Florida.

He has refused to offer Biden a full concession, having reiterated baseless claims of widespread fraud in the November presidential election.

The final days of the Trump presidency unfolded chaotically in the wake of the Capitol riot on Jan. 6, which stirred an uproar over his role in inciting “insurrection” while Congress was engaged in a constitutional process to certify Biden’s win in the election.

Expectations are high that Biden, whose political career spans nearly half a century, including his two vice-presidential terms under Barack Obama through January 2017, will bring what experts call “normalcy” back to the White House after the rocky years under Trump.

Under the banner of putting America’s interests first, Trump pulled his country out of international agreements, implemented protectionist trade measures and pressured allies in Asia to pay for more of the costs associated with hosting U.S. troops in their countries.

His often erratic and provocative behavior has resulted in diplomatic friction, including with some of the United States’ closest allies. He has also deepened division within U.S. society with his controversial tweets and remarks on racism, immigration and protests.

Trump has become the first elected U.S. president to fail to win a second term since Republican George H.W. Bush in 1992. Republicans have also failed to retake the House and lost control of the Senate in the 2020 elections.

Biden will be the oldest ever U.S. president at the time of inauguration. As vice president, Harris, 56, will be first in line to take over as president if Biden becomes unable to serve.

As the pandemic continues to rage on, killing more than 400,000 people in the country, the committee in charge of the inauguration events has asked the public to celebrate the day “virtually.”

In lieu of the traditional inaugural parade from the Capitol to the White House following the swearing-in ceremony, Biden will arrive at the White House with a presidential escort consisting of representatives from every branch of the military.

The center of Washington, meanwhile, has entered a state of lockdown amid heightened concerns over armed protests, with over 20,000 National Guard troops reportedly mobilized to support law enforcement in the U.S. capital.