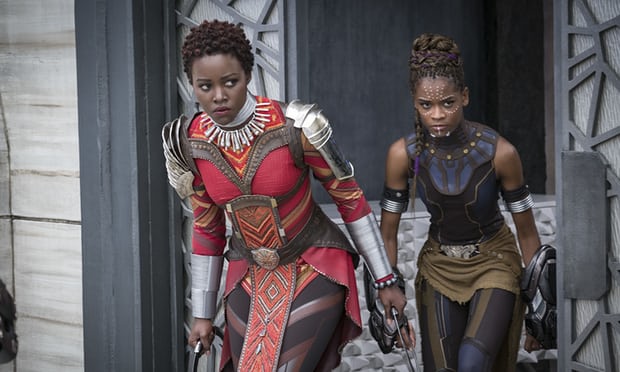 The last thing Shareena Clanton expected when she decided to organise a free screening of superhero blockbuster Black Panther for Melbourne’s Indigenous and African youth was for Marvel to get involved.

When Clanton, an actor best known for her role as Doreen in the Foxtel drama, Wentworth, saw Black Panther, she knew this was something different. It wasn’t just that the director, Ryan Coogler, and the majority of the cast were black – something rare enough on screen as it is, let alone in a superhero film.

Nor was it simply that the story focused on black characters in powerful roles, telling a story with them at the centre.

“The fact that this film culminates with a celebration of beautiful strength and black beauty and black power is everything,” Clanton says. “It’s a welcome advancement in our industry.”

Clanton was keen to get as many kids of Indigenous Australian and African heritage along to see the film in her current hometown of Melbourne as she could. Inspired by the charitable actions of Hollywood stars such as Octavia Spencer, but without any financial capacity of her own to fund a screening – or, indeed, any experience in events management or fundraising – Clanton decided to start a GoFundMe page to generate some community support for the event.

“I had no idea what I was doing,” she tells Guardian Australia, laughing. She was nevertheless propelled by the firm belief that it is important for young black kids to see themselves represented in the stories they see on screen.

“When I was growing up it was still predominantly white shows through the Australian media,” she says. Seeing actors such as Deborah Mailman on television was revelatory for her. “She was one of the first black people I would see on TV – an Indigenous woman who looked like me.”

Because there were so few Indigenous faces on TV, much of her inspiration came from the black American faces in films and sitcoms such as The Fresh Prince of Bel Air.

“I think we don’t see ourselves often represented in powerful positions, especially as people of colour, often we’re relegated to the sidelines as supporting or expositional narratives,” Clanton says.

“I think the paradigm is shifting but it’s not progressing fast enough. And I think that this film eradicates white-centric narratives entirely.”

Clanton said she cried when a publicist from the film’s production company Marvel called her to say they would provide funds to support the first screening so that it was cost-neutral. With that initial support, she would potentially be able to host multiple screenings, and she plans to use the funds raised online to do just that.

Marvel would not comment on the nature of the support they were providing, only to confirm that they had come across Clanton’s GoFundMe page and were able to facilitate a screening for her.

“There’s an endless discussion of inclusivity and diversification, and I think on a societal level we throw the word diversity around … without actively laying down the foundation, challenging structures,” Clanton says.

“I’m hoping that our youth are reminded to stand strong in their truth, and unwavering and unapologetic in their own fire and courage.”

For Clanton, the recent media beat-up over youth crime in Melbourne only added fuel to that fire.

“We already know that there’s a huge amount of vilification within the mainstream media [of black kids] and they are demonised as a result,” she says. “What I’m trying to endorse here is something incredibly positive. Who knows, we might be able to inspire the next superhero film writer, the next director or another actor who sees themselves up there and goes, yeah, that is possible. Now you’ve shown me that it’s possible.”

In order to fill the screenings, she has reached out to Melbourne-based community groups and youth-focused organisations and is still taking expressions of interest through the fundraising page.

“It’s about being able to see yourself in a position where despite the obstacles, despite the atrocities that you may face, despite the losses, that you are able to overcome.”