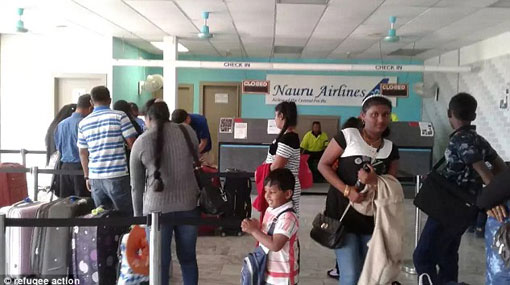 Four more families of refugees and a cohort of single men including Sri Lankans have left immigration camps on Nauru to start new lives in the United States.

The group of 29, including eight children, who flew off the island nation on Sunday is the fifth cohort to depart Nauru under Australia’s refugee resettlement deal with the US.

They included four families and a cohort of single men from Sri Lanka, Afghanistan, Rohingya and Pakistan.

It comes a week after 26 refugees, including two Sri Lankan families with three babies left Nauru for the US.

Just 139 refugees have left Nauru and 85 from Papua New Guinea’s Manus Island since last September, despite the resettlement deal being announced 15 months ago.

The US agreed to take up to 1250 refugees from the offshore detention centres under the deal Australian Prime Minister Malcolm Turnbull reached with the previous Obama administration.

It was hailed as the worst ever by now-president US Donald Trump but has agreed to honour the deal.

According to the Refugee Action Coalition, no Iranian, Somali or Sudanese refugees are among those who have left this year.

It’s despite Australian Border Force officials denying any particular nationalities were banned from resettling in the US.

US officials were expected to remain in Nauru for another few weeks but had not yet scheduled any new vetting interviews for another round of refugees, according to Refugee Action Coalition spokesman Ian Rintoul.

‘Despite the glaring problems with the US deal, Malcolm Turnbull returned from his trip to the US with no better undertakings from Trump about the numbers or timing of refugee resettlement in the US,’ Mr Rintoul said.

‘Yet, Border Force officials have admitted for the first time that hundreds of people, refugees and asylum seekers on Manus and Nauru may be excluded from the deal. Turnbull has also repeated that New Zealand’s offer to accept 150 refugees a year will not be considered until the US deal ‘has run its course’. This is a formula that will condemn hundreds on Nauru and Manus Island to an uncertain fate, without safety or security.’

Hilma - August 6, 2020
0
A giant floating monument of the five Olympic rings was temporarily removed Thursday (August 6) from its location in Tokyo Bay to...

Around 90 houses damaged in Homagama, Sri Lanka due to strong...