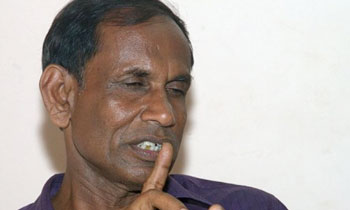 A man was arrested by the Jaffna Police in connection with assaulting former LTTE media spokesman Daya Master in Jaffna yesterday.

Daya Master who is also the Media Director of DAN TV, a private media institution was assaulted in his office at the Hospital Road in Jaffna.

The Jaffna Police who had initiated an inquiry following a complaint had arrested the suspect, Moses Sathgunadas (53) a resident of Jaffna.

Police said the motive of the assault has not been revealed.

Suspect to be produced before the Jaffna Magistrate Court.