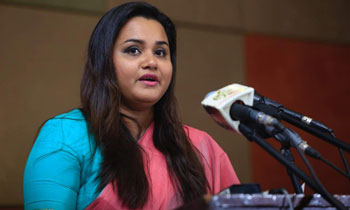 Female genital mutilation was not acceptable in the 21st century, said Jayathma Wickramanayake, the United Nations Secretary-General’s Envoy on Youth, speaking at an international forum in Gambia on strategies to combat the practice.

She said it was not acceptable and this was done in the name of tradition, culture, and religion or in the name of ensuring that women were to take on subservient roles to men they will eventually marry.

“This is not acceptable in the 21st century,” she added.

She said globally, over 200 million women and girls were estimated to have undergone some form of genital mutilation and girls aged 14 and younger account for about 44 million of those who had been “cut.”

“According to the UN Population Fund (UNFPA), although the practice is declining in many countries where it is prevalent, many of these countries also experiencing a high rate of population growth – meaning that the number of girls who undergo genital mutilation will continue to grow if efforts are not significantly scaled up,” she added.

“History has taught us that human societies can come up with reprehensible social practices – that are justified under false guises – to strengthen the power structures or maintain the status quo for certain groups in society,” she said.

“Luckily we also know that social practice is not static and that it can change as our understanding evolves,” she said.