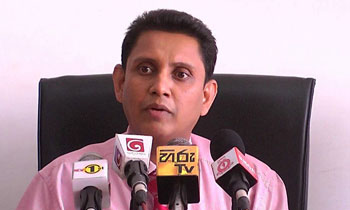 The GMOA yesterday urged the government to immediately issue a gazette notification abolishing the South Asian Institute of Technology and Medicine (SAITM) in Malabe.

GMOA Secretary Haritha Aluthge said they would take stern action with regard to the SAITM issue after December 31.

While condemning the government’s decision to absorb SAITM students to a new medical faculty attached to the Sri Lanka Institute of Information and Technology (SLIIT), he said they would no longer support the Presidential Committee appointed on the SAITM issue.

“It is evident from this decision of the government that these authorities are attempting to fulfil the objectives of SAITM Chairman Dr. Neville Fernando, Health Minister Rajitha Senaratne and Higher Education Minister Lakshman Kiriella,” Dr. Aluthge said.

He said the pro-SAITM parties would be victorious if this decision was implemented, whereas the citizens of this country including SAITM students could be considered defeated.

Dr. Aluthge said the only solution to this was to abolish the SAITM and that the concept of non-governmental and not-for-profit institutes would not be practical in the current context.