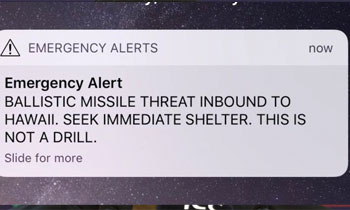 An alert warning of an incoming ballistic missile aimed at Hawaii was sent in error Saturday, sowing panic and confusion across the US state — which is already on edge over the risk of attack — before officials dubbed it a “false alarm.”

Emergency management officials eventually determined the notification was sent just after 8:00 am (1800 GMT) during a shift change and a drill after “the wrong button was pushed” — a mistake that lit up phones across the archipelago with a disturbing alert urging people to “seek immediate shelter.” There were frenzied scenes of people rushing to safety — a bathtub, a basement, a manhole, cowering under mattresses.

Adventurer Alison Teal called it “the worst moment of my life.” The erroneous message came after months of soaring tensions between Washington and Pyongyang, with North Korea saying it has successfully tested ballistic missiles that could deliver atomic warheads to the United States, including the chain of volcanic islands.

“I deeply apologize for the trouble and heartbreak that we caused today,” said Vern Miyagi, administrator of Hawaii’s Emergency Management Agency.

“We’ve spent the last few months trying to get ahead of this whole threat, so that we could provide as much notification and preparation to the public.

“We made a mistake,” he acknowledged in a press conference. “We’re going to take processes and study this so that this doesn’t happen again.

“The governor has directed that we hold off any more tests until we get this squared away.” As social media ignited with screenshots of the cell phone emergency warning, Representative Tulsi Gabbard quickly tweeted that it was a “FALSE ALARM,” with Hawaii’s EMA confirming “there is NO missile threat to Hawaii.” US military spokesman David Benham later said US Pacific Command “has detected no ballistic missile threat to Hawaii. Earlier message was sent in error.” The warning — which came across the Emergency Alert System that authorities nationwide use to delivery vital emergency information — read: “BALLISTIC MISSILE THREAT INBOUND TO HAWAII. SEEK IMMEDIATE SHELTER. THIS IS NOT A DRILL.” A corrected message indicating that “there is no missile threat or danger to the state of Hawaii” was not dispatched to phones until nearly 40 minutes later.

“I know firsthand that what happened today was totally unacceptable,” Governor David Ige said of the alert, which was also broadcast on some local television stations.

“I’m sorry for that pain and confusion that anyone might have experienced.” In explaining the delay, he noted there was no automatic way to cancel the false alarm, so it had to be done manually.

– ‘Jarring’ – ============= Both the governor and Miyagi assured no single person would be capable of making such a mistake in the future, and the Federal Communications Commission said it was launching a “full investigation” into the incident.

The White House said US President Donald Trump had been briefing about the incident, calling the alert “purely a state exercise.” Senator Brian Schatz of Hawaii, echoing stances of outrage taken by several other of the state’s politicians, called the mistaken notification “totally inexcusable.” Though the alert was quickly deemed false, many Hawaii residents heeded the nerve-wracking warning, scrambling to take refuge in hallways and basements.

Teal, the adventurer and Hawaiian native, said “everyone was in a panic.” “Traveling the world as an extreme adventurer, I’ve been in very scary situations from snowstorms to sharks to hot lava. Nothing as terrifying as a missile coming to kill everyone you know and love,” she told AFP.

Lauren McGowan, on holiday in Maui with family members and friends, was on her way to breakfast when her phone blared the alert.

She and her family quickly returned to their hotel, where staff ushered them along with some 30 people to a basement cafeteria and distributed water and food.

The alert and rush to shelter caused “confusion,” McGowan said, particularly for the children in the group.

“No one had any idea what was really going on,” the 28-year-old from New York told AFP, explaining they had no cellular service underground.

“It was a bit jarring for sure,” she said of the experience.