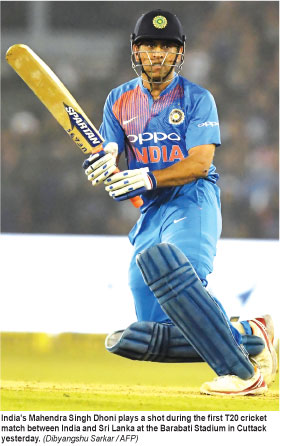 Skipper Rohit Sharma Wednesday lauded the wrist spinners for their wicket-taking abilities after Yuzvendra Chahal powered India to their biggest Twenty20 win, as the hosts outplayed Sri Lanka by 93 runs in the first match on Wednesday.

Chahal returned impressive figures of 4-23 with his leg-spin to help dismiss Sri Lanka for 87, in 16 overs, while chasing 181 as the hosts took a 1-0 lead in the three-match series.

India’s previous biggest T20 triumph in terms of runs was their 90-run win over England in the 2012 World Cup group match in Colombo.

“Those two guys (Chahal and Kuldeep), if you look at their careers over the last few months, they have always been a wicket-taking option in the middle,” Sharma said of the spin duo.

“It’s important to understand what the team expects of them and they’ve delivered. They don’t fail to impress us.”

Earlier opener Lokesh Rahul smashed 61 off 48 balls as India posted a challenging 180-3 after being invited to bat first.

But it was Dhoni (39) and Manish Pandey (32) who set up India’s big win with their unbeaten 68-run stand for the fourth wicket that lifted the team from 112-3 to put up a challenging total.

Dhoni hit 4 fours and a six during his 22-ball blitz while Pandey also hit the bowlers to all parts of the ground during his 18-ball stay.

Rahul, who replaced Shikhar Dhawan in the XI, put on a crucial 63-run stand with Shreyas Iyer, who made 24, after India a lost an early wicket.

“I think KL Rahul at the top was a great move. He wasn’t a part of the ODI squad but he came and showed that he belongs here,” said Sharma.

“He (Rahul) batted magnificently and we felt that he was hitting the ball well. And great finish to the batting innings by MS and Manish,” he added.

Angelo Mathews got skipper Sharma caught at mid-on for 17 to check India’s surge after the openers gave the team a brisk start.

Rahul, who hit 7 fours and a six, carried on with his attacking play as he reached his second T20 fifty in 34 balls, prompting skipper Thisara Perera to rotate his bowling options.

The ploy worked as Sri Lanka took two quick wickets including that of Rahul and also managed to stem the flow of runs. Perera bowled Rahul on a well-disguised slower delivery.

But Dhoni and Pandey finished off the innings with a flurry of fours and sixes as India got 66 runs in the last five overs.

In reply, the Sri Lankan batting fell like a pack of cards against the Indian wrist spinners as opening batsman Upul Tharanga top-scored with 23.

“Our batting line-up didn’t click. Really disappointed. We are working hard at practice, to handle the wristspinners,” said Perera.

“These are the best 15 (players) we have (in the squad) so we have to stand up and do the job in the next match.”

The second match is scheduled for Friday in Indore.