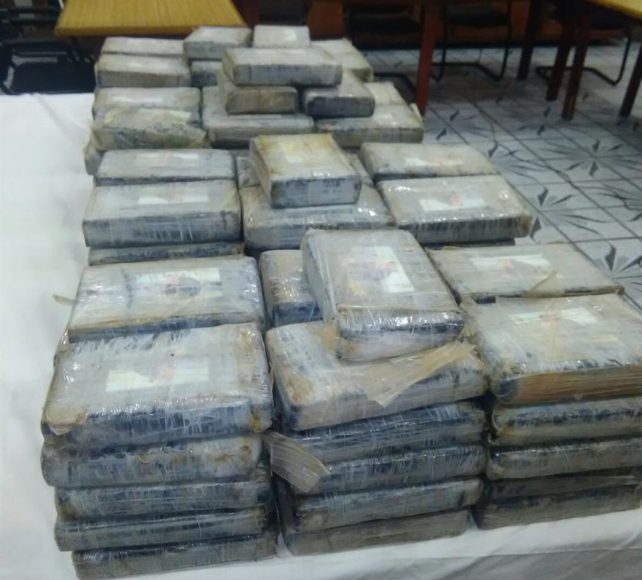 Initial steps were taken at Katunayake in the presence of President Maithripala Sirisena and Prime Minister Ranil Wickramasinghe to prepare 928 kgs of cocaine in custody to be destroyed in Puttalam this evening (15).

The process of transforming the 928kg and 229g of cocaine into a substance that can be destroyed in an eco friendly manner, took place at the premises of INSEE Ecocycle in Katunayake this morning (15).

The President, Prime Minister, Ministers Sagala Ratnayake and Thalatha Athukorale were among a host of distinguished figures present on the occasions.

Sri Lanka Police on January 11 said that over 900 kilograms of cocaine, seized by the Police Narcotics Bureau (PNB) during past raids, will be destroyed in Katunayake on January 15.

Minister of Law and Order and Southern Development Sagala Ratnayaka said last week that necessary legal provisions will be taken to destroy seized drugs in front of the public.

He stated that heroin, illegal cigarettes, liquor and cannabis worth Rs. 37.55 billion has been seized by the Police Special Task Force (STF) the Police Narcotics Bureau (PNB) and Organized Crimes Prevention Division (OCPD) from January 01, 2017 to December 27, 2017.

Accordingly, heroin worth Rs. 136 million, illegal cigarettes worth Rs. 35 million, liquor worth 90 million and cannabis worth 113.8 million were seized during last year.

The Police Narcotics Bureau had seized 220kg and 650g of cocaine worth over Rs 4.4 million between January 01 and December 31, 2017. It had arrested 29 suspects for the possession of those drugs.

The PNB also said that 332 kilograms and 500 grams of heroin worth an estimated Rs 9,900 million was arrested during that period along with 29,690 suspects.

SL govt to import 2,500 cows from Australia, less than a year after scandal

Hilma - May 28, 2020
0
The Archeological Survey of India (ASI) recently discovered a monolithic sandstone Shiva linga from the 9th century CE, during the ongoing conservation...