An industrial equipment developer in southwestern Japan has produced an innovative solution that uses water in swimming pools at defunct schools to prevent its solar power systems from overheating.

ELM Inc., which said its pool-utilizing solar system is the first of its kind in Japan, commenced operation of its first installation Monday at a ceremony held at a school in Minamisatsuma, Kagoshima Prefecture, where its head office is based. 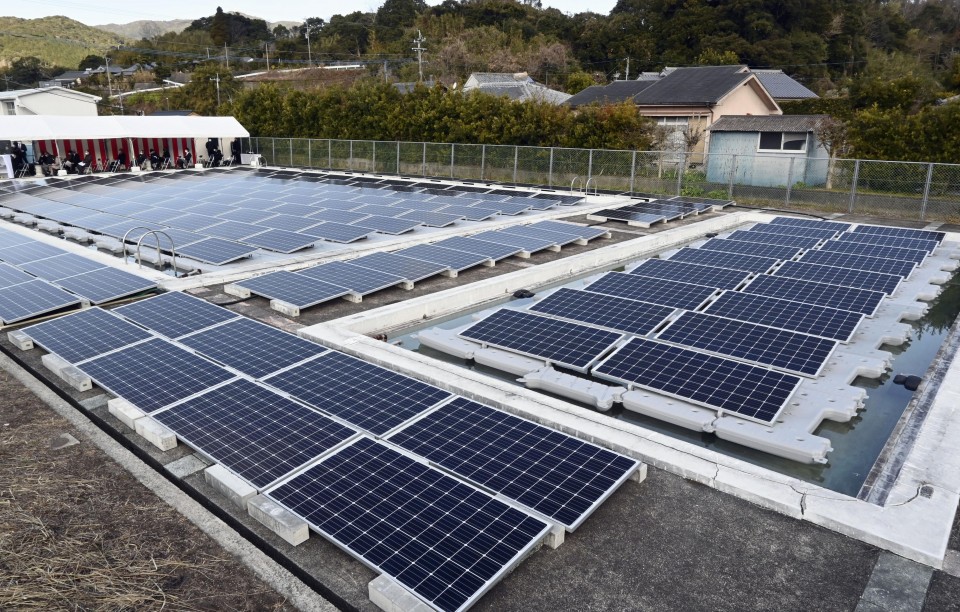 Photo taken on Jan. 18, 2021, shows solar panels installed on the surface of swimming pools at an abandoned school in Minamisatsuma, Kagoshima Prefecture. (Kyodo)

ELM’s system puts pools in closed down schools, a common sight around Japan due to the nation’s low birth rate, that are often left to decay to work as heat sinks, improving the efficiency of solar panels that suffers when they overheat in direct sunlight.

ELM’s low-cost solution sees panels installed on floating pontoons, with the pool water used to cool the cells above. At the school in Minamisatsuma, the pool change rooms were used to store the converter.

Around 30 people involved in the project gathered at Monday’s ceremony at the school where 160 solar panels were installed on two pools, one 25 meters long and the other 6 meters long.

“Pools in abandoned schools have no use, so I want them to play the role of a power plant for the region,” said ELM CEO Takakazu Miyahara.

The company estimates the system in Minamisatsuma will be able to generate around 61,000 kilowatt-hours of electricity per year. The average household in Kyushu uses approximately 300 kWh per month.

It will sell the electricity to Kyushu Electric Power Co., serving the southwestern Japan region, and it is also considering installing a battery storage system in the future for use during natural disasters and other emergencies.

ELM plans to roll out the system in 15 locations in Kagoshima and in the western Japan prefecture of Okayama.