While authorities have yet to give a definite cause for the blast, a local TV report, quoting security sources, said the blast might have been set off by a fire sparked by welding work at a port warehouse, where a huge amount of chemicals was being stored. 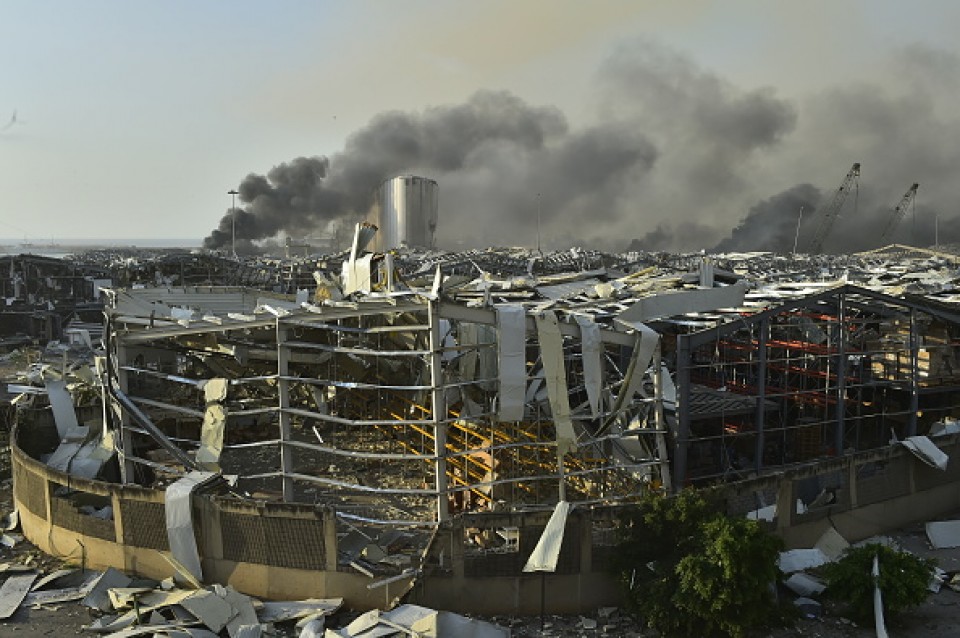 Smoke rises after a fire at a warehouse with explosives at the Port of Beirut led to massive blasts in Beirut, Lebanon on August 4, 2020.
(Anadolu Agency/Getty/Kyodo)

Reuters quoted the country’s president, Michel Aoun, as saying 2,750 tons of ammonium nitrate had been stored for six years at the port without adequate safety measures.

Prime Minister Hassan Diab said Tuesday that there would be accountability for the tragedy.

The blast shattered windows, caused apartment balconies to collapse and cars to overturn. Hospitals in the Lebanese capital were reportedly overwhelmed with injured people.

In Washington Tuesday, President Donald Trump said senior U.S. military officials seem to think the blast was an “attack” rather than “some kind of a manufacturing explosion type of event.”

“It was a bomb of some kind,” Trump told a press conference, without elaborating, while noting that the United States “stands ready to assist Lebanon.”

According to the Japanese Embassy in Lebanon, one Japanese sustained minor injuries from shattered glass.

In a tweet Wednesday, Australian Prime Minister Scott Morrison said one of its national was confirmed to be among the dead.

The blast, which sent up “a huge mushroom cloud-like shockwave,” resulted in damage to buildings across a radius of several kilometers, CNN said.

“I felt like I was running from a war zone,” a 25-year-old woman told Kyodo News by phone, adding she heard two explosions and saw debris outside her office located 3 kilometers from the blast.

Israel denied any involvement with the incident, according to local media, although tensions had been mounting since July between Israel and Hezbollah, a Shia militant group in Lebanon. The two were involved in a monthlong conflict in 2006.

Lebanon, which endured a civil war from 1975 to 1990, is currently in the midst of an economic crisis and is battling a surge in coronavirus infections.