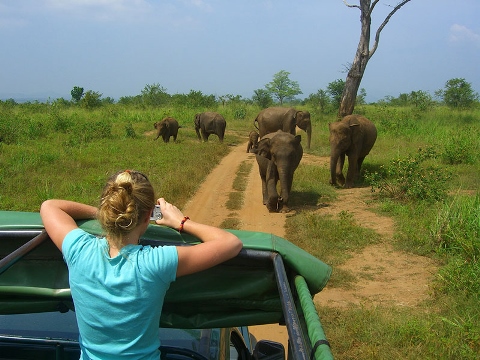 They said the tourist arrivals to the transit home, which is primarily a facility to rehabilitate orphaned elephant calves until they are strong enough to release back into the wild, has increased significantly and daily about 400 tourists visit the center.

The center, established in1995 with help from the Born Free Foundation, implement many programs to look after the elephant calves. The orphanage takes in the elephant calves orphaned or injured anywhere in the island and nurture them until they are ready to be released to the wild.

The center has released 110 calves to the wild so far through their programs and currently is taking care of 48 calves, Veterinary officer at the center Dr. Vijitha Perera said.

Dr. Perera said more than Rs. 50 million is spent annually for the milk needed to feed the elephant babies. In addition the center requires funds for food and medical treatment for the elephant calves.

The Center, which accepts donations of milk powder and cash, also operates a foster system and 30 foreigners have also become partners in the process.