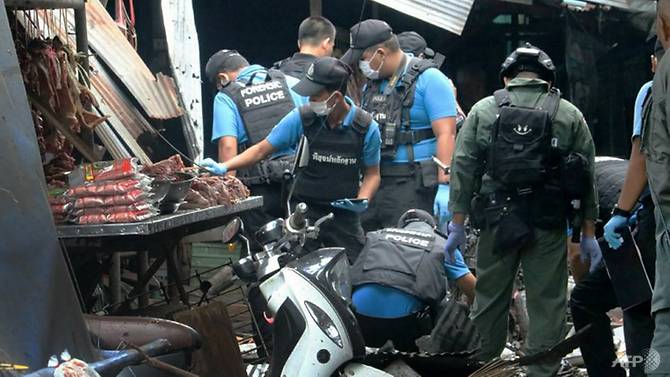 A motorcycle bomb killed three civilians and wounded 22 others on Monday (Jan 22) morning at a market in Thailand’s insurgency-hit south, officials said, the first such attack on a “soft target” in the Muslim-majority region for months.

A rebellion against Thai rule in the culturally distinct Thai “Deep South” bordering Malaysia has left nearly 7,000 dead – the majority civilians – since 2004.

The death toll in 2017 from the insurgency was the lowest in 13 years of conflict as peace talks edged forwards and the Thai junta boosted its security lockdown on the region.

But Monday’s bomb at a packed market in Yala town popular with Buddhists and Muslims suggests a return to attacks on civilian targets.

Chunks of torn corrugated roofing and parts of destroyed motorbikes and stalls littered a narrow alleyway in the market, as police picked through a scene of devastation shortly after the bomb.

“The suspects parked the motorcycle in front of a stall selling pork in downtown Yala … it detonated 10 minutes later killing three civilians and wounding 19 others,” the policeman told AFP, requesting anonymity.

“It’s the first big attack in downtown Yala in two years and is quite serious because people died.”

It was not immediately clear if the bomb deliberately targeted the pork stall – and potentially its Buddhist customers.

The wounded were taken to the main hospital in Yala, which is the main town of the province with the same name.

Pramote Prom-in, an army spokesman for the region, confirmed the death toll, adding 22 were wounded “mainly with minor injuries”.

Thailand, which colonised the ethnically Malay south roughly a century ago, has for decades been confronted by ethnic fighters seeking more autonomy, but the conflict flared up into its bloodiest phase in 2004.

Rights groups have accused both the insurgents and security forces of widespread human rights abuses.

The shadowy militant cells, who operate from remote communities and the forested Malaysia border zone have in recent months stepped back from targeting civilians amid heavy criticism.

Monday’s attack could mark a dangerous new turn in the tactics.

“If it was the work of the insurgents, then it’s a sign of things to come – a stern message to the authorities that they will resort to hitting soft targets,” Don Pathan, a Thailand-based independent analyst, told AFP.

Pathan speculated the market blast could be “retaliation” for a specific incident in a conflict defined by tit-for-tat operations by insurgents and security forces.

“But over recent years the insurgents haven’t targeted civilians out right … this is a big concern.”

Lack of medical personnel in Thailand ‘an obstacle in developing vaccines’