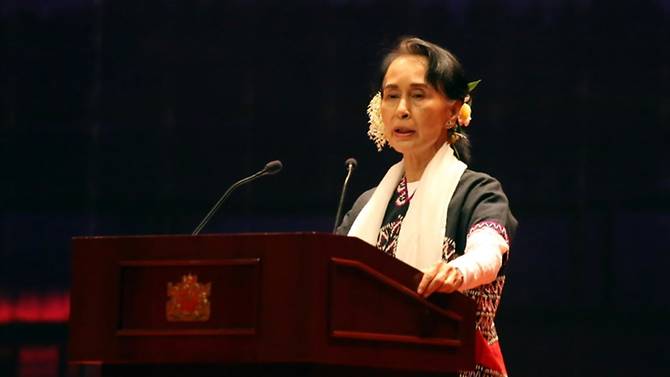 After months of staunch denials of abuse, the army on Wednesday said a probe found four members of the security forces helped kill 10 Rohingya militant suspects at Inn Din village on Sep 2, leaving their bodies in a hastily dug pit.

Some 655,000 Rohingya have fled western Rakhine state to Bangladesh since August, carrying with them consistent accounts of atrocities by Myanmar’s army.

Rights groups have accused Nobel Laureate Aung San Suu Kyi of failing to condemn the widespread abuses during the army crackdown, which followed raids by militants from the Arakan Rohingya Salvation Army (ARSA).

After meeting the Japanese foreign minister on Friday Aung San Suu Kyi raised the army’s admission of involvement in the Inn Din killings as a “new step taken by our country”.

“In the end, rule of law in the country is the responsibility of that country. It is a positive indication that we are taking the steps to be responsible,” she added, according to a report carried by the Global New Light of Myanmar.

Myanmar’s army has a grim track record of rights abuses chiselled out across the country over 50 years of rule.

Observers hoped the emergence of Aung San Suu Kyi’s civilian government in 2016 would see the army ease up on its notorious “scorched earth” approach to rebellion and conflict.

Amnesty International has called the summary killings at Inn Din “the tip of the iceberg” in terms of atrocities carried out since August and urged a wider, impartial probe.

But the conflict area of Rakhine remains locked down to media, aid agencies and UN investigators.

ARSA, the Rohingya militant group, “wholeheartedly” welcomed the army’s admission saying it validated the wider allegations of abuses including a campaign of rape and murder and the systematic torching of villages.

“These 10 Rohingya innocent civilians found in the mass grave … were neither ARSA members nor had any association with ARSA,” it said in a statement circulated on Twitter.

The UN and US have accused Myanmar’s army of ethnic cleansing, with the UN rights chief saying it may even be guilty of genocide.

Myanmar refutes the allegations, blaming militants for causing the violence and the international media and aid agencies for spreading false information due to a pro-Rohingya bias.

The Rohingya are reviled in Buddhist-majority Myanmar, where most are denied citizenship and described as “Bengalis” – or Muslim interlopers from Bangladesh.