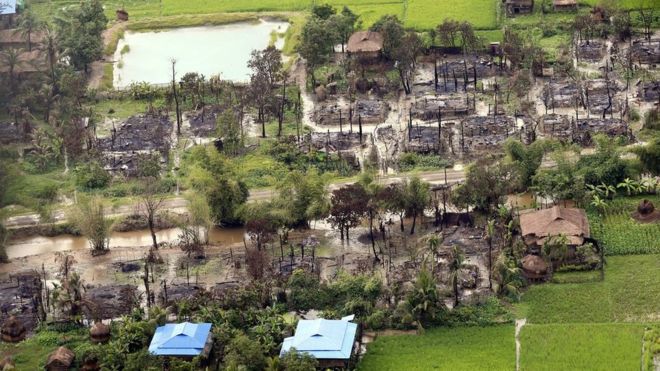 It now says it was behind an ambush on a military truck in Rakhine state on Friday that injured three people.

The group, seen as terrorists by Myanmar’s government, say they are fighting for Rohingya political rights.

Arsa operates in Rakhine state in northern Myanmar, where the Rohingya people have faced persecution. The Myanmar government has denied them citizenship and sees them as illegal immigrants from Bangladesh.

Clashes erupt periodically between ethnic groups, but in the past year, an armed Rohingya insurgency has grown.

Arsa has carried out only sporadic attacks, but early on 25 August last year, it launched assaults on about 30 police and army posts, triggering a fierce military response.

At the same time, the authorities accused Arsa fighters of killing 28 Hindu villagers whose bodies were allegedly found in a mass grave.

Jonathan Head, the BBC’s South East Asia correspondent, says that not all Rohingya support the group, and their strategy is poorly formed.

At least 6,700 Rohingya were killed in the month after last August’s violence, Médecins Sans Frontières says.

After an internal investigation, in November the army exonerated itself of any blame regarding the crisis. It put the death toll at about 400.

The military denied killing any civilians, burning their villages, raping women and girls, and stealing possessions.

The government’s assertions contradicted evidence seen by BBC correspondents. The United Nations human rights chief has said it seems like “a textbook example of ethnic cleansing”.

Bangladesh and Myanmar have been working on a plan to repatriate some of the 650,000 refugees, but it is unclear on what terms they could be allowed to return, and whether they would be resettled into camps.

What happened on Friday?

Myanmar’s government said a military vehicle taking someone to hospital was targeted by about 20 “extremist Bengali terrorists” with home-made mines and arms.

On Sunday, Arsa posted a statement by its leader Ata Ullah on Twitter, confirming its involvement and saying it has “no other option but to combat ‘Burmese state-sponsored terrorism’ against the Rohingya population for the purpose of defending, salvaging and protecting the Rohingya community”.

It also called on Rohingya people to be consulted over their “humanitarian needs and political future”.

What may happen next?

The military views Arsa as an Islamic terrorist movement, justifying its exceptionally harsh response to the August attacks.

Arsa announced a ceasefire right after those attacks, and was assumed to have been seriously weakened by the exodus of most of the Rohingya population to Bangladesh. However, the bombing on Friday shows that some Rohingya militants have remained behind.

The subsequent statement by Arsa, promising to continue what it calls its legitimate struggle against the Burmese state, suggests more attacks may follow.

This is likely to harden the military’s determination to keep international aid agencies and the media out of Rakhine state, making the already distant prospect of repatriating the refugees even more remote.