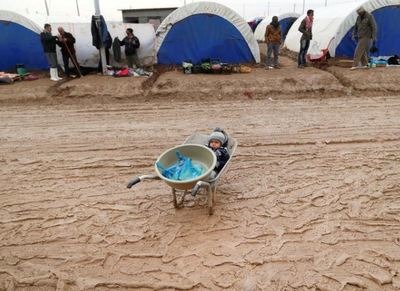 One in four Iraqi children are in poverty and four million are in need of assistance as a result of the country’s war with Islamic State militants, the United Nation’s children agency said on Sunday.
The UN has verified 150 attacks on education facilities and 50 attacks on health centres and personnel since 2014, UNICEF said in a statement. Half of Iraq’s schools need repairs and over 3 million children have had their education interrupted, it said.

Iraq declared victory over Islamic State in December, having taken back all the territory captured by the militants in 2014 and 2015, and is seeking $100 billion in foreign investment in transport, energy and agriculture as part of a plan to rebuild parts of the country and revive the economy.

Kuwait will host an international conference on Iraq’s reconstruction on February 12-14.

“Children are Iraq’s future,” said Geert Cappelaere, UNICEF regional director for the Middle East and North Africa.
“The Kuwait Conference for Iraq this week is an opportunity for world leaders to show that we are willing to invest in children – and through investing in children, that we are willing to invest in rebuilding a stable Iraq.”
The United States, which leads an international coalition that provided Iraq with key air support in the fight against Islamic State, does not plan to contribute any money at the Kuwait conference, US and Western officials said.

Tensions in tourism in Nepal