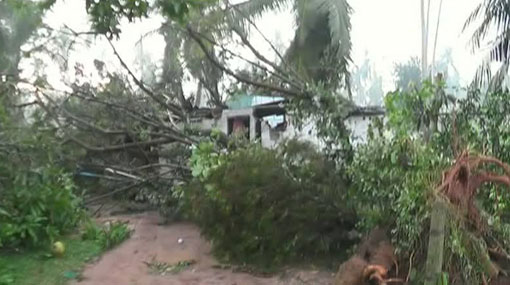 Strong winds that developed into a storm ravaged several areas within Gampaha yesterday (12), causing severe damage to over 300 houses in the area.

Very strong winds were reported at 5.45pm yesterday in Walpita, Katukirinda, Sirikampatha, Diklanda and Alugolla. Residents of the area attempted to flee as large trees uprooted while thundershowers followed.

Reports confirm that over 300 residencies in the area were damaged by falling trees and debris. The CEB has also reported that the power supply from Kotadeniyawa to Dedigama has been disrupted by the incident.

Local authorities sent relief to the affected areas with the aid of the Police and special units from the Sri Lanka Army.

The Department of Meteorology issued a statement that the strong winds are yet to be identified as a tornado. The Director of the Department stated that a special team has been deployed to gather further information to make an accurate classification.