More than 500 people in Tokyo were treated at hospitals on Thursday and Friday after slipping and falling due to ice and snow on the streets, as the capital saw its first heavy snowfall in four years, authorities said.

Central Tokyo had 10 centimeters of snow by Thursday evening, with disrupted traffic restored to normal on Friday. Temperatures dropped to minus 3.5 C in central areas of the capital on Friday morning, although they rose by the afternoon due to sunny weather.

A total of 525 people, aged between less than 1 year old and 100, were taken to hospitals in the capital, including a woman in her 60s who suffered severe injuries, according to the Tokyo Fire Department. 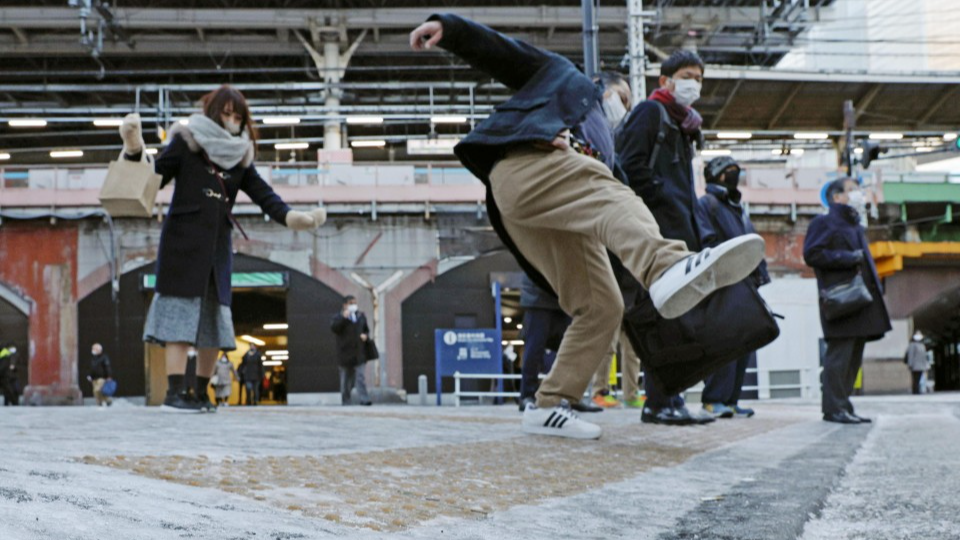 Commuters are pictured near JR Shimbashi Station in Tokyo on the morning of Jan. 7, 2022, after central parts of the capital observed 10 centimeters of accumulated snow, a level unseen in four years. (Kyodo) ==Kyodo

A bus hit the exterior of a house in Kokubunji in western Tokyo on Friday morning, when the driver, who sustained minor injuries, apparently tried to avoid a bicycle in the road. Nobody inside the house was injured, authorities said.

Police said 77 traffic accidents resulting in injuries had occurred in Tokyo due to the snow as of Friday morning.

The snowfall left up to 100 vehicles stuck on the Tokyo Gate Bridge in the bay area at one point. The Rainbow Bridge, a major tourist attraction in the capital, and some 14 routes on the Metropolitan Expressway were temporarily closed due to the snow.

Several railway lines were suspended or delayed due to train car inspections, although almost all services resumed operations by the afternoon.

At JR Shimbashi Station in a major Tokyo business district, many commuters were cautiously walking on icy roads.

“It was difficult to walk because roads around my house were frozen too. I wish I could have teleworked today,” said Namiki Kasahara, a 29-year-old resident of Nishitokyo.

In adjacent Saitama Prefecture, 140 people were injured, four of them severely including a 72-year-old woman who fell from her bicycle and broke her leg.

In Ibaraki Prefecture, northeast of Tokyo, 548 traffic accidents leaving 64 people injured had occurred as of Friday morning due to snow and ice on the roads. At least 244 were injured in Chiba Prefecture, east of Tokyo, one severely, authorities said.