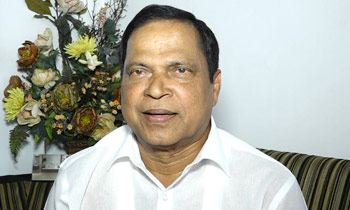 UPFA Galle District MP Piyasena Gamage has been sworn in as the State Minister for Law & Order and Southern Development, the President’s Media Division said.

He was sworn in as the State Minister before President Maithripala Sirisena at the President’s Official Residence this morning (28).

Piyasena Gamage was sworn in as a Member of Parliament (MP) on November 10, to fill the vacant position created by the removal of former UPFA MP Geetha Kumarasinghe.

Gamage was next in line after Kumarasinghe was disqualified by the Supreme Court for holding dual citizenship.