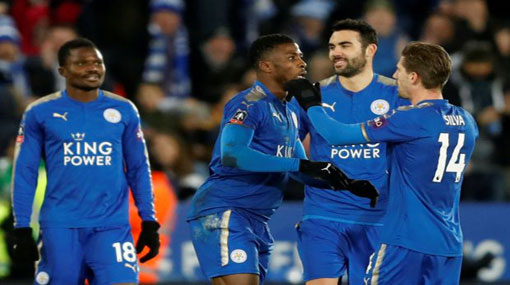 Kelechi Iheanacho became the first player to score a goal awarded by a video assistant referee in English football as Leicester beat Fleetwood in an FA Cup third-round replay.

Iheanacho opened the scoring – with a routine strike – from Islam Slimani’s pass.

The big talking point of the game came when the former Manchester City striker initially had a goal disallowed for offside from Riyad Mahrez’s through ball.

But referee Jonathan Moss liaised with video official Mike Jones, who told him Nathan Pond’s trailing foot was keeping Iheanacho onside, and the goal was awarded 67 seconds after it hit the back of the net.

Leicester striker Jamie Vardy, who missed the 0-0 draw in the initial tie,came on late on to face his former club, who are mid-table in League One.

This is the third time the video assistant referee (VAR) has been used as a trial in English football, all this month, after Brighton v Crystal Palace in the FA Cup and Chelsea v Arsenal in the Carabao Cup.

The video referee was consulted in both those games, but never used to reverse a decision.

So 16 January 2018 and the first VAR decision becomes a landmark date for English football, like the first substitute to come on or the first game to be played under floodlights.

Moss had briefly spoken to the video official when Iheanacho had an earlier goal ruled out because the ball had crossed the byeline before Demarai Gray crossed it.

He also had another chat when Leicester’s Vicente Iborra was pulled back in the box, but they decided not to award a penalty.

And he consulted him again after disallowing a second goal by the Nigerian for offside.

But this time Jones decided – correctly – that Pond was actually keeping him onside, a decision that was easily missed in real time by the officials.

Referee Moss would have had the choice to watch it again on a screen on the side of the pitch, had he wanted to – but he had the freedom to trust the video official.

Nigeria striker Iheanacho, 21, has been disappointing since his £25m summer move from Manchester City.

He has not had many chances – only playing a total of 403 minutes before the game against Fleetwood, but he has rarely impressed during that time – one goal against Leeds in the EFL Cup in October aside.

But he did a good job against Fleetwood, opening the scoring with their first shot of the whole tie after converting a pass from fellow bit-part big-money forward Slimani.

He then played in Slimani with a good ball over the top, but the Algerian – who did not look impressed to be replaced after 55 minutes – volleyed wide.

Iheanacho did well for his historic goal, when he ran on to captain-for-the-day Mahrez’s through ball before clipping the ball over keeper Chris Neal.

Fleetwood played their part in the first half, with Ashley Hunter forcing a diving save from Eldin Jakupovic and Conor McAleny going close on several occasions.

But in the end the quality of Iheanacho was too much for them.