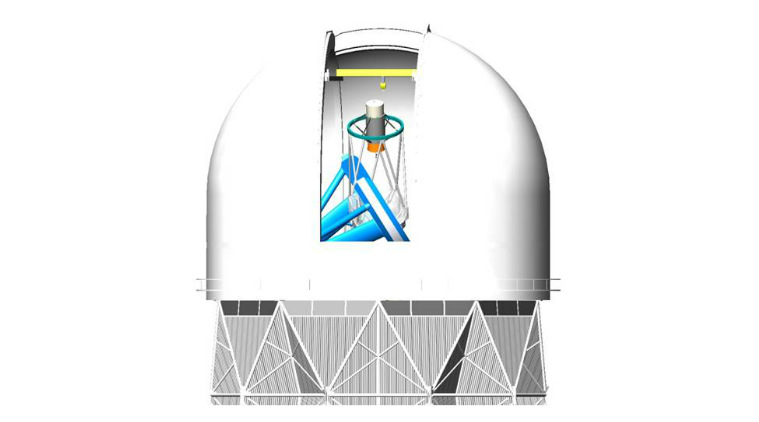 A 45-year-old telescope is being re-purposed to create the largest 3D map of the universe and solve the mystery of dark energy, which is believed to drive the accelerating expansion of the cosmos. Tucked inside a 14-story, 500-tonne dome atop a peak in Arizona, the telescope took in the night sky for the first time and recorded its observations in glass photographic plates.

The temporary closure sets in motion the largest overhaul in the telescope’s history and sets the stage for the installation of the Dark Energy Spectroscopic Instrument (DESI), which will begin a five-year observing run next year at the US National Science Foundation’s Kitt Peak National Observatory (KPNO) – part of the National Optical Astronomy Observatory (NOAO).

“This day marks an enormous milestone for us,” said Michael Levi DESI Director of the US Department of Energy’s Lawrence Berkeley National Laboratory (Berkeley Lab). Now we remove the old equipment and start the yearlong process of putting the new stuff on, said Levi. More than 465 researchers from about 71 institutions are participating in the DESI collaboration.

The entire top end of the telescope, its secondary mirror and a large digital camera, will be removed and replaced with DESI instruments. A large crane will lift the telescope’s top end through the observing slit in its dome.
Besides providing new insights about the universe’s expansion and large-scale structure, DESI will also help set limits on theories related to gravity and the formative stages of the universe, and could even provide new mass measurements for a variety of elusive yet abundant subatomic particles called neutrinos.

“One of the primary ways that we learn about the unseen universe is by its subtle effects on the clustering of galaxies,” said Daniel Eisenstein of Harvard University in the US. “The new maps from DESI will provide an exquisite new level of sensitivity in our study of cosmology,” said Eisenstein. The Mayall Telescope has played an important role in many astronomical discoveries, including measurements supporting the discovery of dark energy and establishing the role of dark matter in the universe from measurements of galaxy rotation. 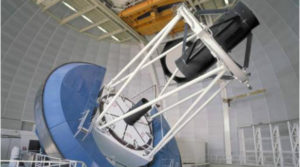 Its observations have also been used in determining the scale and structure of the universe. Dark matter and dark energy together are believed to make up about 95 per cent of all of the universe’s mass and energy. It was one of the world’s largest optical telescopes at the time it was built, and because of its sturdy construction it is perfectly suited to carry the new 9-ton instrument.

“We started this project by surveying large telescopes to find one that had a suitable mirror and wouldn’t collapse under the weight of such a massive instrument,” said David Schlegel a DESI project scientist at Berkeley Lab. The expansion of the telescope’s field-of-view will allow DESI to map out about one-third of the sky. Brenna Flaugher, a DESI project scientist who leads the Astrophysics Department at Fermi National Accelerator Laboratory, said DESI will transform the speed of science at the Mayall Telescope.

“The telescope was designed to carry a person at the top who aimed and steered it, but with DESI it’s all automated,” Flaugher said. “Instead of one at a time we can measure the velocities of 5,000 galaxies at a time – we will measure more than 30 million of them in our five-year survey,” she said. DESI will use an array of 5,000 swivelling robots, each carefully choreographed to point a fibre-optic cable at a preprogrammed sequence of deep-space objects, including millions of galaxies and quasars, which are galaxies that harbour massive, actively feeding black holes.

Twitter’s new feature asks you to open article before retweeting