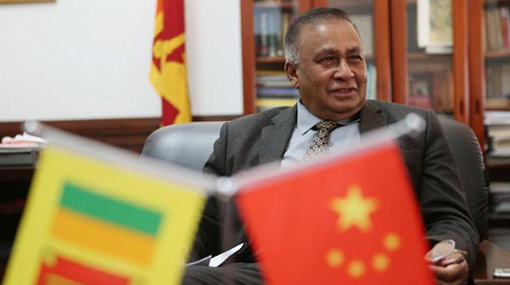 Sri Lankan Ambassador to China Karunasena Kodituwakku says Sri Lanka is determined to sign the FTA with China when negotiations are concluded, despite the concerns raised regarding the tariff liberalization program.

In an interview with Global Times, he also disagreed with the notion that China and Sri Lanka have been hasty about FTA talks.

Excerpts of the Interview:

GT: Foreign media reported that Sri Lanka is hesitant about signing a free trade agreement [FTA] with China as it is concerned about the economic impact of a “rushed” deal. Do you agree that China and Sri Lanka have been hasty about FTA talks? How are the FTA talks going? How do you evaluate a future FTA between the two sides?

Kodituwakku: I do not agree that China and Sri Lanka have been hasty about FTA talks. The process started with a feasibility study undertaken in 2013 and negotiations commenced in 2014. We were not able to meet in 2015 due to a change of government, but talks resumed in 2016.

So far, we have had six rounds of negotiations and made good progress. Given the friendly and long-standing relations with China, and China being an important development partner, Sri Lanka is keen to conclude FTA negotiations.

It is true that the tariff liberalization program, or tariff elimination under the FTA, has raised concern among stakeholders in certain sectors, which is natural.

On the other hand, we need increased market access to China for our products currently being exported and exports that will be generated through investment in Sri Lanka from China.

Therefore, we need to take into account these different interests and strike a balance in the proposed modality for tariff liberalization. Therefore, these aspects on tariff liberalization modality are currently being analyzed and we need to be creative to find alternative solutions to these issues. We will propose to hold the 7th round of negotiations in Colombo shortly.

Furthermore, I would like to add that the teams which are doing those negotiations are professionals of both countries. They have taken a long duration due to complex situations in both economies.

However, Sri Lanka is determined to sign the FTA with China when negotiations are concluded.

GT: The China-funded Mattala Rajapaksa International Airport has been in service for five years. Can you introduce this airport’s future value to the development of the Hambantota region?

Kodituwakku: The future contribution it can make to the economy will depend on the business value. For the last five years, the business was not sufficient to earn enough income to manage itself and to pay back the loan that was taken from the Export-Import Bank of China [Exim Bank]. That is why we were looking for some partners like the one we had in the sea port in Hambantota, which was not a valuable business entity, but last year, we successfully brought China Merchants to the Hambantota sea port, now they have taken over the long lease.

GT: In recent years, there has been a growing amount of investment from China in Sri Lanka. In what way do you think this investment could boost the economic growth of your country?

GT: Sri Lanka has been actively cooperating with China in many fields within the Belt and Road initiative framework. What role do you expect Sri Lanka to play within this framework in the future?

When the Belt and Road Forum was held last year in Beijing, Sri Lanka was among those countries invited to the forum. We are fully cooperating with the Chinese government to make the Maritime Silk Road a success.

Under the Maritime Silk Road, there is one Chinese port city project in Colombo. China has already invested $1.4 billion to reclaim land from the sea, roughly about 274 hectares. The government of Sri Lanka has decided to convert that reclaimed land into an international financial center.

And we will be inviting more and more investors, not only from China, but also from all over the world who are in the finance business, so it could be a very important project under the Belt and Road initiative.

South Asia means not only Sri Lanka, but also India, Pakistan, Bhutan, Nepal and Bangladesh. South Asia is becoming a very important hub for economic activities. Sri Lanka will be the core center for the region’s financial business.