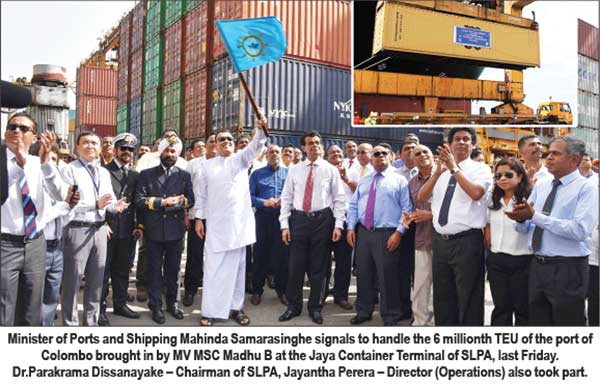 The Port of Colombo handled its 6 millionth TEU (Twenty-Foot Equivalent Unit) on December 22. A special function was held at the Jaya Container Terminal (JCT) of Sri Lanka Ports Authority (SLPA) to celebrate the handling of the 6 million TEU mark. Minister of Ports and Shipping Mahinda Samarasinghe attended as chief guest of the event.

Speaking at the occasion, the minister stated that it was commendable to witness the Port of Colombo has achieved great feats through public private collaboration. ” Deviating from the traditional competition, Sri Lanka Ports Authority controlled Jaya Container Terminal, privatly owned SAGT and CICT together have proven of a success story we can continue to make the Port of Colombo the hub port in the region,” the Minister said. He thanked all officials, staffs and employees of SLPA, SAGT, CICT, shipping agents, freight forwarding agencies and stakeholders who always contributed in numerous ways to elevate the position of the Port of Colombo to higher standards amongst the container ports of the world.

Dr.Parakrama Dissanayake – the Chairman of SLPA speaking at the occasion stated that it was a historic milestone to Sri Lanka Ports Auhtority as it was the collective effort of SLPA with the JCT, SAGT and the CICT handling 6 million containers for a year in the Port of Colombo. “We have to be mindful of the marketing challenges we are expected to face. The commencement of operations of the East Terminal of the Colombo South Harbour in near future will see further increased efficiency in the Port of Colombo to attract more ships at its deep draft berths,” Dr.Dissanayake added.

The Port of Colombo marked the operation of its first TEU in the year of 1973. Accordingly, the constructions of Sri Lanka Ports Authority (SLPA) controlled Jaya Container Terminal’s stage – I was completed in 1985. The completion of the stage – ii of the JCT in 1987, stages – iii and iv in 1995 and 1996 respectively marked the increase of operation volumes of the Port of Colombo. Commencement of the South Asia Gateway Terminal (SAGT) at the Port of Colombo took place in 1999. In the year 2002, with the assistance of the Asian Development Bank (ADB), Sri Lanka Ports Authority (SLPA) initiated the construction of the Colombo Port Expansion Project (CPEP) which is known as the Colombo South Harbour today. The new harbour was constructed with plans to the ever increasing Ultra Large Container Vessels. Its first terminal known as the Colombo International Container Terminal (CICT) was completed with the investment of over US $ 500 million as a PPP loan and on BOT model. The CICT of Colombo South Harbour came into operations in 2013.

With the rapid development of port infrastructure including the construction of new terminals and the public private partnership in operations at the Port of Colombo, the handling capacity of the Port of Colombo dramatically increased.

Sri Lanka Ports Authority (SLPA) being the land lord, regulator and the port operator together with other terminals has been able to attract more Main Lines and Feeder Services to the Port of Colombo in 2017.

JioMart, the e-commerce venture from India’s richest man, launches in 200 cities and towns

Hilma - May 28, 2020
0
An unborn baby died in East Nusa Tenggara after the ambulance carrying the baby’s mother got stuck in a traffic jam where...