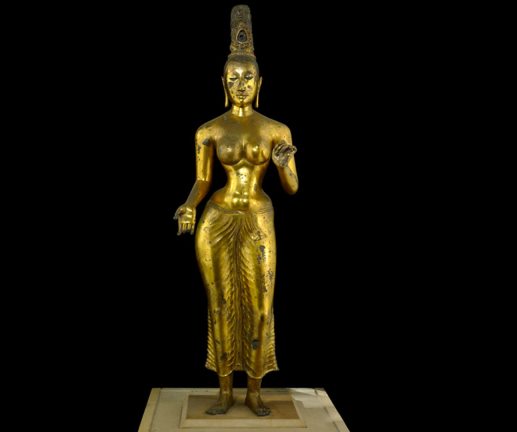 The eighth century gilt-bronze sculpture of goddess Tara, taken by force from the last King of Kandy, when the British annexed Kandy in the early nineteenth century and was given to the British Museum in 1830 by the former British Governor of Ceylon, is on display again from Thursday. The British Museum’s China and South Asia Gallery fully had reopened to the public Thursday after renovation and refurbishment.

According to scholarly articles, at one time this statue was thought to be a model of the guardian deity Pattini, but it is now agreed that this statue is of Tara. It is the only known Anuradhapura example of this size that now survives. The statue is valuable not just from its appearance but also because of its manufacture. The statue was not hollow but made from an expensive metal using a technologically advanced technique of lost wax casting, according to the BBC.

This rare sculpture was taken by the then British Governor, Sir Robert Brownrigg, from the last King of Kandy when the British annexed the sacred city. He later donated it to the British Museum in the 1830s.

A Xinhua report published to mark the reopening of the gallery said: The gallery explores the cultures of China and South Asia through a range of magnificent objects.

One half of the gallery presents the histories of China from 5000 BC to the present. From iconic Ming dynasty blue-and-white porcelain to delicate hand scrolls, from exquisite Tang dynasty tomb figurines to contemporary ink paintings, the displays feature calligraphy, painting, jade, silk and porcelain.

Some of the modern artworks are on display for the first time in this gallery as the museum seeks to present a glimpse of present China.