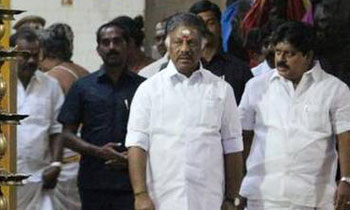 Tamil Nadu Deputy Chief Minister O. Panneerselvam has assured fishermen, that the State government would request the Centre to prevail upon the Sri Lankan government and secure the release of all fishermen arrested by the Sri Lankan navy along with their confiscated boats at the earliest.

In a brief chat with reporters in Rameswaram on Saturday, Mr. Panneerselvam, who was on a visit to the island to offer worship at Sri Ramanathaswamy temple, said Chief Minister Edappadi Palaniswami has already taken up the issue with the Centre.

Mr. Panneerselvam said that a fishermen delegation had presented a memorandum, urging the government to take speedy action to secure the release of fishermen and their boats. They told him that the boats had suffered extensive damage and should be secured at the earliest.

At present, 84 fishermen and more than 150 boats were detained in Sri Lanka after the navy arrested the fishermen on charges of fishing illegally in the Island nation’s territorial waters.

On the retrieval of Katchatheevu, Mr. Panneerselvam said the case filed by former Chief Minister Jayalaltihaa was pending before the Supreme court and “we are hopeful of retrieving the islet.”