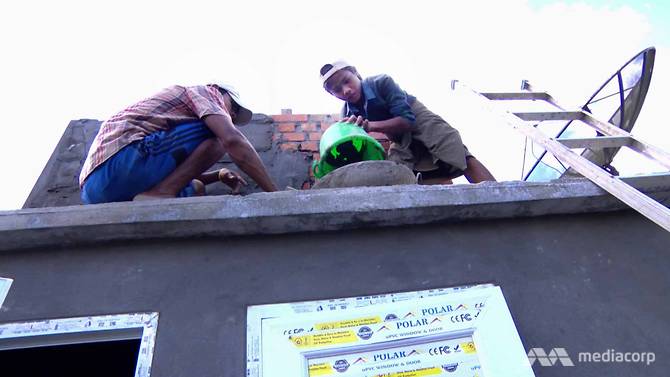 His back bent under a heavy load of bricks and gravel, the boy trudges towards an unfinished water tank under the morning sun, starting his long day as a mason’s assistant.

Only 13, Aye Min is already a construction worker, having left school three years ago to help support his family. “It’s dangerous (work). I’ve worked on the seventh floor before; I was very scared. If I had fallen, I’d have died,” he recalled.

Before he started working for his uncle’s construction firm, he was selling ice lollies around his neighbourhood. Three years of labour have robbed him of an ordinary childhood, and it has been a hard life – he works from morning until late, sometimes 8pm.

With money problems at home, however, he has little choice. He said: “If I don’t work, then I won’t get money. I need to work.”

His plight is one shared by many youngsters in Myanmar, where one in five children aged 10 to 17 are working instead of attending school, stated a government report in 2015. The real number is estimated to be higher.

Other reports have suggested that some 1.2 million children aged five and above are trapped in the country’s illegal labour market, with some toiling for up to 14 hours a day, as the Channel NewsAsia programme Get Real found out.

It is little wonder that Myanmar has a reputation for being one of the worst countries for underage labour – an image the government is striving to shed, as it made the problem’s eradication a top priority in recent years.

Ms Piyamal Pichaiwongse, the International Labour Organisation’s deputy liaison officer in Yangon, said this child labour problem started to manifest itself only when the country began to open up.

Everywhere I go, in tea shops, in construction, I see children working. And that’s quite phenomenal.

“Child labour is about poverty, attitudes (and) culture change. There are so many actors that are contributing to the problem,” she said.

The economic boom in Myanmar, which began its transition from military-governed isolation to democratic rule in 2011, has fuelled this crisis as companies exploit cheap child labour to save costs.

And the number of young workers continues to rise as new hotels, cafes, factories and other businesses rush to provide jobs for recruits like Aye Min, regardless of their age.

Aye Min would have preferred to study, letting on that he did well in school and that mathematics was his favourite subject. But his father’s income from carpentry work is irregular.

“I can’t go to school with my dad’s income alone. I give all my salary to the family,” said the teenager, the youngest member of his uncle’s construction team.

He does not complain about the work, though it is tiring, but he admits to feeling “uneducated”. He said: “I feel inferior. Other kids are going to school, but I can’t. I feel sad.”

GAME OF CAT AND MOUSE

In 2016, the National League for Democracy-led government made eradicating child labour one of its priorities, and has been drafting and amending labour laws as part of a 15-year plan to combat the problem.

Senior party member May Win Myint said at the time: “If we can’t solve this problem, there won’t be any development in our country because they’ll be the people serving the country in the future. They need to be educated to do that.”

So the government amended the Factories Act, prohibiting children below 14 years old from working in factories. The previous minimum age was 13.

It is also illegal to employ children younger than 16 years old on a full-time basis, and employers who violate this law face up to three months in jail and a fine.

But many underage children are still working in factories, keeping the Ministry of Labour busy.

Inspector Soe Nyi Nyi from the Factory and General Labour Law Inspection Department said it usually cautions errant employers, issuing them with a prohibited notice that the child is not allowed to work.

Such employers, however, have found ways to evade detection, playing cat and mouse when the inspectors come knocking.

Hay Marn, 16, whose name has been changed to protect her identity, has been working full-time at a garment factory in the Hlaing Thar Yar Industrial Zone outside Yangon since she was 12.

For four years, she had been able to dodge the inspectors, who failed repeatedly to discover any of the underage children in the factory.

“(The inspectors) first came four to five months after we started work. I got goosebumps; my heart was beating very fast,” she recounted.

While the inspector was still at the top floor, the boss would come down and tell me: ‘The inspector is here. All children must go and hide in the toilet.’

That is what she did each time, so as to earn US$3 for every 10-hour shift. The salary cannot compensate for the “tiring” workload, she said, adding: “We get scolded if the clothes aren’t done.”