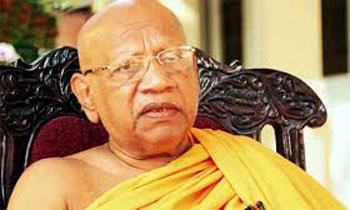 One of the most prominent saffron-clad Sri Lankan emissaries, Most Ven Prof. Bellanwila Wimalarathana Nayake Thera who brightened the seat of monkhood, socio-religious harmony and reconciliation in our times, having championed the crusade against dirty politics and its hegemonic impact on us, is no more. His sudden demise, at a time, his critical guidance is most needed to rid our body politic, of its pollutants, came as a scathing blow to all moderate and right-thinking segments of our society on the eve of our 70th Independence day; particularly after the passing-away of his university pal, Most Ven Maduluwawe Sobhitha Nayake Thera who had left an indelible mark among all of us. Memories of Ven Wimalarathana Thera, no doubt, would linger in our minds for the rest of our lives, because he was not only affiliated with the Sangha fraternity, but also with the laity (Dayaka) who venerated him as an outspoken monk. In one sense, he remained a strong supporter for social justice and reforms, and in others, he was an author of many books, a role model for his Kotte Sangha Sabha members, an erudite scholar at academic levels, a straight forward voice for the voiceless, and not the least, as the most distinguished monk in the Province.

Born in Bellanwila, just 76 years ago, on a noteworthy day (14 April), he belonged to a well-known family lineage of ‘Omaththage’ in the area, and came from a family of several brothers. It was the then incumbent, Most Ven Bellanwila Sri Somarathana NayakeThera, highly respected as the pioneer of contemporary revival of the ancient Bellanwila Raja Maha Viharaya, who ordained the present Viharadhipathi, Most Ven Bellanwila Dhammarathana Nayake Thera and the late Ven Wimalarathana Thera as Ven Somarathana’s novice monks (samanera), who followed basic Dhamma education at the Vidyalankara Pirivena, and also afterwards at university.

A fact that remained very distinct in his varsity days of learning was his close association with the then socialist-leftist doctrine of the Philip Gunewardene era. He also, it is said, was instrumental in organizing student protests inside the campus against different issues as young revolutionary monks of the times, an experience that would have perhaps carried him forward into his subsequent firebrand type of protests as he matured later on, to be a full-fledged scholar and a social reformer. Upon the demise of his Guru, Ven Somarathana Thera in 1984, he was compelled to take the reins as the Viharadhikari in this huge place of worship, as Ven Dhammarathana Thera, his own elder brother, had by then migrated to Singapore on missionary work. Bellanwila temple was his forte afterwards. After obtaining his Doctorate (PhD) from the University of Lancaster in the UK on his return, he was invited to the University of Sri Jayewardenepura for academic teaching. There, he rose to be the Dean of the Faculty of Buddhist and Pali Studies until his subsequent premature retirement due to the ever increasing workload in the temple. He is one of those most rare personages who had gradually reached the apex of office as the Chancellor in the very university where he served as a lecturer.

Late Wimalarathana Thera, as a scholar, took to writing at first to university journals, magazines, newspapers, and others, before he penned his own books of academic research and value. ‘Buddhism & other Religions’, ‘Evolution of Making Buddha Statues’, ‘Viharalipi Saraniya’, ‘Paramitha Sarana’, are some of the most popular ones authored by him. His Sinhala translation of the ‘Unshaken Mind’ (Nosalena Manasa), was serialized in national newspapers and it grabbed the attention of many intellectuals and readers alike. “There is nothing more pleasurable, for me, than writing or authoring a book, as it is my simple hobby. It is actually what I enjoy the most as I grow older and older,” he once plainly quipped to this writer during an interactive meeting at the temple, many moons ago. He was so close to our hearts and just a few days before his untimely death, he was found giving final touches to his latest research book on a new theme.

The tripartite combination of Ven Iththepane Dhammalankara Nayake Thera, Ven Maduluwawe Sobhitha Thera and Ven Wimalarathana Thera did not take long to emerge as dedicated guardians of the common-folk as the political scenario after 1995 began to take shape, apparently shifting towards a policy of appeasing separatists who were fighting for a division of the country. The trio stood their ground, firm, unmoved and opposed vehemently to those moves, as it would be disastrous to the country, to any division as planned by some political authorities of the times. All appeals fell on deaf ears and finally street protests led by the trio, began to swell and rotated round the Parliament roundabout near Diyawannawa, flanked by thousands of protesting monks and patriotic civilians. Their leadership compelled the then government to shelve that plan of action and changed their discourse. Needless to highlight, Ven Wimalarathana Thera who had the gift of the gab and the ability to convey the repercussions of any such ill-conceived political move won the day. For him, any assembly of predetermined decision makers was only a public platform where diverse opinions were aired.

Hence, late Thera was always invited to speak his mind, may it be a meeting of monks, politicians or otherwise, as he had the distinguished ability of addressing the concerns, seeing the full picture, of the issue at hand. He was admired and respected for such forthrightness and honesty. The Ven Thera received much respect for this attitude from all quarters including that of non-Buddhist dignitaries as well.

Fearless Ven Wimalarathana Thera never stood for communal politics nor got into any such platform during his illustrious life, full of spirit. Nor did he sing hosannas to anyone, how much mighty that person would be, as he did not expect any favours from any person.

Another outstanding feature in him was his very close association with religious chiefs of all denominations through the Congress of Religions which he co-chaired until his demise. He fully believed in reconciliation, co-existence and ethnic harmony and always distanced himself from passions of communal hatred and extreme ideologies, harboured by some of his own community, Maha Sangha and others. Though he at times was the subject of criticism, he stuck to his guns and challenged his dissidents, to prove otherwise, if possible. The presence of former Arch Bishop Rev Oswald Gomis, former Bishop Rev Kenneth Fernando, Kurukkals and Moulavis at the temple premises, no sooner, the news of his unfortunate death was made public, was ample proof of this. That was a fitting tribute to his celebrated name, Ven Wimalarathana Thera unbowed in the presence of any mighty person, was a friend of all strata of society.
He always disassociated himself from extremists, whether they were politically backed or otherwise. He asserted that unless people of all ethnicities work together, we would never be able to take this country forward. With his death, there will be an irreplaceable vacuum, with any future replacement near impossible.

Perhaps only a limited number of Sri Lankans are aware that the Bellanwila Raja Maha Viharaya has been at the forefront of launching many a diverse welfare project. A symbolic charge of Rs 20 from each vehicle parked in the yard there, has so far rescued the lives of many patients by donations amounting to more than Rupees 10 million, in the past two years. More than a hundred such appeals, still reach the temple in search of financial help, for medicine or surgery, a unique humanitarian project of an exemplary nature.

So, is the Community Development Centre at Bellanwila, managed by the temple in order to provide vocational training to school dropouts, it was one of the pioneering institutes in the country, even before State patronage for this sphere came in to effect. Our late Ven Wimalarathana Thera had a great network of philanthropists and well-wishers who would always stand by him either during such projects or the organizing of the Perahera or any other event in the temple.

It is also pertinent to mention here that Ven Dhammarathana Nayake Thera in his capacity as the religious adviser at the Buddhist Library in Singapore always assisted Ven Wimalarathana Thera by way of providing much-needed raw materials to such projects.

Likewise, the Sunday school, elders’ day-care centre, pilgrims’ rest, welfare shops, and such received the patronage of our late Thera, despite the heavy expenditure to be incurred. Another feature that impressed us was his ability to maintain undisturbed administration of such projects in a relaxed mood, although, at times he was critical. Only a few perhaps know that he was a cricket fan and never wanted to miss a match, either here or abroad. He also possessed a deep knowledge about reputed cricketers and interacted with them, whenever, time permitted. His passion for music and aesthetics was no less and saw no bounds. He always wanted to assist musicians in whatever way possible. One of the felicitation ceremonies he attended was that of Sujatha Attanayake at the Sri Lanka Foundation Institute, about which, he later expressed his opinion, with this writer, in person at the temple. The Venerable Thera was so attached to artistes and film producers that he offered all possible assistance to anyone who sought him.

Had late Somarathana Thera been considered the pioneer of modern revival, it was none other than the late Wimalarathana Thera who carried the name of Bellanwila to international fame, and created a niche for it in overseas chronicles. He widely travelled and won recognition for himself as a preacher and an intellectual of Buddhist knowledge. At times, he would crack jokes with those he feels comfortable to do so. And he was the tower of strength behind the spectacular annual Esala Perahera, after the demise of the Most Ven Sri SomarathanaThero. He used to spend a fortnight of sleepless nights during the Perahera season, but ensured everything worked well until the Diyakapana Ceremony got underway. He was so close to this writer on many fronts, although our Thera seldom had enough free time to relax. His affinity with us in the village was a strong catalyst and he made the day so interesting, when we travelled out of Colombo, once a year, to attend the commemorative alms-giving of our Nayake Thera. But this year, it would sadden all of us when we have to commemorate Him too. May his cycle in Sansara be short and let him be reborn among us.

May the Venerable Bellanwila Wimalaratna Thera attain the Supreme Bliss of Nirvana!

Face masks can be dangerous for children under two, Says Japan Health Experts

I won’t hesitate to withdraw Sri Lanka from int’l organizations that harass our forces: President