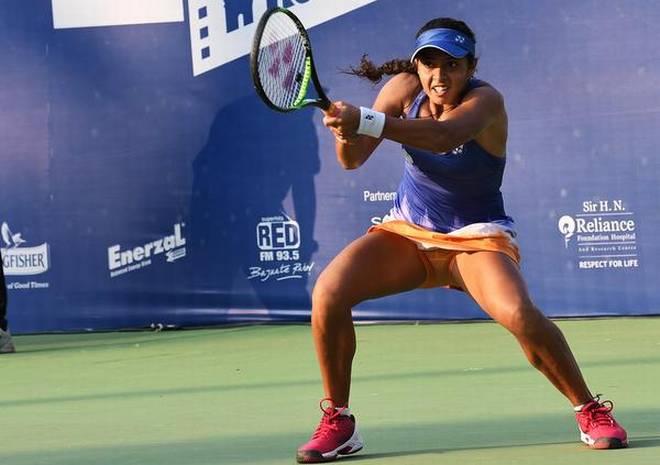 Her maiden entry into the quarterfinals of a WTA series event in Mumbai, the $125,000 L&T Mumbai Open, has given a huge boost to her confidence going ahead, feels India’s top woman tennis player Ankita Raina.

Ankita also wished that her coach Hemant Bendrey could travel with her on the WTA circuit overseas, going by the way his presence at the Cricket Club of India helped her iron out some mid-tournament shortcomings.

“I am happy it helped me with my confidence and made me believe that I could be at the top level and I could achieve that,” the 24-year-old Ankita told PTI a day after losing to France’s higher ranked player Amandine Hesse in the quarterfinals after blowing away quite a few chances to take the match at least into the deciding third set.

The Ahmedabad-born, Pune-based Ankita — ranked 293 which is bound to go up when the next week’s list is released – went down 3-6 6-7 to Hesse, but should have taken at least a set off the Frenchwoman, ranked 265.

Had the Indian won, it would have given her a chance to line up against the fast-rising 19-year-old top seed Aryna Sabalenka, at 96 the only top-100 player in the draw, in the semi-finals.

She had earlier got past Veronika Kudermetova of Russia and P Plipuech to reach the last eight.

This, however, was not the first time Ankita, for long the country’s number one singles player, won a round in a WTA series event, having done it previously two years ago in China.

“It was in the China 125K that I got in directly into the main draw with my ranking and won the first round,” she said, adding, “It was around similar quality tournament. The Chinese players were there along with other top players.”

She had also played at bigger WTA events, including the USD 7,00,000 event in Birmingham, which is a warm-up event for Wimbledon, and had won a round there in the qualifiers.

“I have played much bigger WTA qualifying events and won one or two rounds, but it was never splashed in India as I was playing abroad. In Birmingham, it was a USD 7,00,000 tournament, the warm-up before Wimbledon.

“I won the first round, was the only Indian there (in singles). Sania (Mirza) was there in doubles. It was something. I did it in Stuttgart last year and in the Tashkent Open made the final qualifiers, as well as in Hong Kong. (But) this is the best performance,” she noted.

Talking about travelling coaches, Ankita said everyone saw how the presence of her coach Bendrey helped her here.

“Playing in your home country makes a lot of difference. The courts suited me, weather was in my favour and my family and coach were there to support me and look after me. Otherwise when you are travelling you have to arrange everything – from practice to recovery.

“The coach was there to immediately rectify what I was doing wrong. As soon as he told me, we did a few drills. That makes lot of difference and everyone saw it.”

“This is the one thing I have been saying for a long time. If I can take my coach along with me that will really help. I play 25-30 weeks of tournaments in a year and I hardly get time to come back and train with my coach.

“If not for so many weeks, but if he can come along for a few weeks it will make a world of a difference and now I am sure, having seen it happening,” she said.

“You have seen other players travelling with the coaches. Even the top seed (Sabalenka) is travelling with her coach, added Ankita, whose career-best ranking of 222 had been achieved in 2015.

On the improvement needed in her game, she mentioned power, fitness and recovery process after games.

“Apart from power and fitness, I would mention my recovery after matches. You have to recover faster if you have to go deep in the draw as you have to play 4-5 matches to go to final.”